Aug. 16 (UPI) — President Donald Trump on Wednesday said he’s disbanded his American Manufacturing Council and the Strategic and Policy Forum, amid reports that their members decided to disband themselves.

Prior to Trump’s statement, CNBC reported that a member of the manufacturing panel said the group disbanded over Trump’s response to the Charlottesville, Va., attack on Saturday.

“The thinking was, it was important to do as a group,” the source said. “As a panel, not as individuals because it would have more significant impact. It makes a central point that it’s not going to go forward. It’s done.”

Trump said on Twitter that he disbanded the councils.

“Rather than putting pressure on the businesspeople of the Manufacturing Council & Strategy & Policy Forum, I am ending both. Thank you all!” Trump wrote.

At least six members resigned from the manufacturing group this week, prior to Trump’s declaration Wednesday.

The last executive to resign from the council was Campbell Soup President and CEO Denise Morrison on Wednesday. She directly cited Trump’s response on Tuesday, when he defended his initial response that “many sides” were involved in the violent confrontation between white nationalists and counter-protesters.

“Racism and murder are unequivocally reprehensible and are not morally equivalent to anything else that happened in Charlottesville,” Morrison wrote. “Following yesterday’s remarks from the president, I cannot remain on the Manufacturing Jobs Initiative. I will continue to support all efforts to spur economic growth and advocate for the values that have always made America great.” 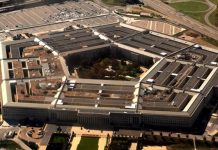 Pentagon: It’s time to bring microelectronics manufacturing to the U.S.