Sunday’s Zaman front page carries an image of Turkish President Recep Tayyip Erdoğan with the headline “Historic excitement about the bridge.” The article said Erdogan will lay the last part of a third bridge across the Bosphorus – a bridge for rail and motor vehicles – that is near completion. A report that surfaced last year said the bridge may bear Erdogan’s name.

The paper’s staff which is pushing back, launched its own newspaper Sunday called Yarina Bakis, or Look to Tomorrow.

Former Zaman journalist Sevgi Akarcesme tweeted that it isn’t just the staff that is skeptical about the newspaper’s government take-over, as evidenced by bouquets of flowers left outside the Zaman offices.

Police raided Zaman’s Istanbul offices Friday just hours after a court ruling put it under state control. Still, the newspaper’s editors and reporters managed to get out a Saturday edition.

The court gave no reason for its decision it put Zaman under authorities. But Turkish Prime Minister Ahmet Davutoglu called the take-over “legal, not political. It is out of the question for either me or any of my colleagues to interfere in this process,” he said.

Police used water guns and tear gas against about 500 Zaman supporters Saturday as they gathered in front of the paper’s headquarters and Zaman staff journalists said access to internal servers had been denied Saturday. Editor-in-chief Abdulhamit Bilici and columnist Bulent Kenes, were fired and escorted from the premises.

The officers set up barricades outside the Zaman headquarters Saturday before it reopened under government control, Al Jazeera reported.

In its last edition published under old ownership Saturday, Zaman said Turkey’s press had seen one of its “darkest days,” the BBC reported.

The former Zaman staff took to social media to post photos of armed special forces inside the newspaper office and also guarding the barricaded perimeter.

“It has been a habit for the last three, four years, that anyone who is speaking against government policies is facing either court cases or prison, or such control by the government,” Bilici said earlier. 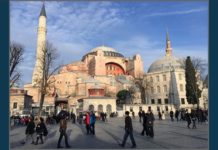 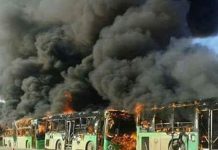 Turkish troops killed in Syria ahead of key Russia meeting 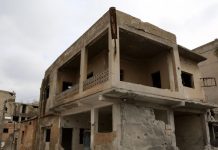