In a anti-smuggling raid Friday night, police capped off a month of undercover meetings with smugglers aimed at recovering the painting. Operation “Peace in the Seven Hills” concluded with the capture of two smugglers in Istanbul’s Fatih district. Daily Sabah reported they intended to sell the painting to undercover cops for $7 million.

Officers presented the painting to the public Saturday, before sending it off to Mimar Sinan Fine Arts University for examination. 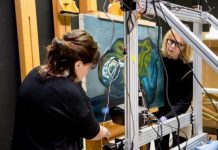