Jan. 17 (UPI) — Brig. Gen. Charles McGee, a decorated Air Force pilot and one of the last surviving members of the Tuskegee Airmen, the all Black squadron of World War II, has died. He was 102.

“While I am saddened by his loss, I’m also incredibly grateful for his sacrifice, his legacy and his character,” Austin said in a tweet. “Rest in peace, General.”

The circumstances of his death were not announced.

The Cleveland native, born Dec. 7, 1919, enlisted in the segregated U.S. Army as a pilot on Oct. 26, 1942, which would be the start of his storied three-decade military career that included 409 combat missions.

As a member of the historic Tuskegee Airmen, McGee flew his first combat mission in Italy on Valentine’s Day of 1944. By the time he’d return to the United States in December of 1945 following the end of World War II, he had completed 137 missions over Germany, Austria and the Balkans and was promoted to captain, according to the U.S. Air Force.

His services, however, were called on again during the Korean War of 1951-53 in which he flew 100 missions and was again promoted, this time to the rank of major.

Then during the Vietnam War, he flew 172 combat missions in a photo reconnaissance plane to end his 30-year service in the Air Force.

“His years in uniform were nothing shy of heroic, and his example of integrity, service and excellence endures,” Gen. Charles Brown Jr., the Air Force chief of staff, said in a statement Sunday. “Indeed, his legacy is foundational to our service, and a daily inspiration for me, personally, and so many other Airmen.”

A biography of McGee by Tuskegee Airmen Inc., an organization for which he was an ambassador, states that after retiring from the military on Jan. 31, 1973, he served in many functionary and honorary positions, including as the director of the Kansas City Downtown Airport and a member of the Kansas City Aviation Department’s Aviation Advisory Council.

Due to his service, the airport named a terminal after him in June.

“We have lost an American hero and a national treasure,” Federal Aviation Administration Administrator Steve Dickson said in a statement. “Brig. Gen. Charles McGee was not only a trailblazing Tuskegee Airman, he was a big man with a big heart who inspired younger generations of aviators to soar.”

In 2007, he, along with all members of the Tuskegee Airmen, was awarded the Congressional Gold Medal, Congress’s highest honor.

Then in 2019, at the age of 100, McGee was promoted to the rank of brigadier general and in February the following year, then-President Donald Trump pinned his stars to his shoulder in the Oval Office before honoring him later that night in his State of the Union address.

“After more than 130 combat missions in World War II, he came back to a country still struggling for Civil Rights and went on to serve America in Korea and Vietnam,” Trump said. “General McGee: Our nation salutes you.”

In a U.S. Air Forces video about McGee, the decorated pilot said he confronted racism amid the military and in life by treating others the way he wanted to be treated.

“Don’t let the circumstances be an excuse for not achieving,” he said. “We could have been ‘they don’t like me, they don’t want me,’ and go off in the corner with our head bowed. That’s not the American way.” 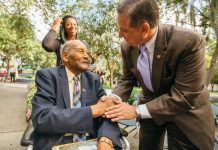