JAMAICA, N.Y., Aug. 27 (UPI) — Two women were arrested and six others injured Thursday at John F. Kennedy International Airport (JFK) after a fight broke out about luggage in the overhead compartments.

Flight 960 touched down at JFK around 8:45 a.m, when a female passenger Jean Ballentine, 61, on the window seat of row 21 tried to climb over a another woman Mary Cannady, 52, in the middle seat.

A nearby male passenger attempted to break up the fight, but Ballentine, considered by police to be the suspect, reportedly fashioned an eyebrow razor and slashed the man’s arm. Cannady allegedly then used a can of pepper spray against Ballentine.

As the pepper spray gas filled the plane, the pilot opened the cabin door and had Ballentine escorted from the plane by police, who charged her with assault and criminal possession of a weapon. The middle seat woman was also charged for unlawful possession of tear gas.

Six individuals were treated by first responders for exposure to the the pepper spray gas and subsequently released. The male passenger’s injuries were minor.

Flight 960 originated from Kingston, Jamaica. It is unknown how the passengers were able to board the plane with an eyebrow razor and pepper spray. Security screenings in Kingston are handled by the Jamaican Civil Aviation Authority. 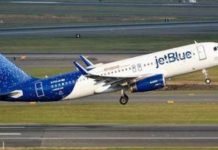 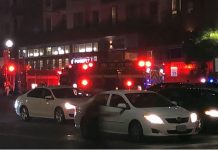