The Iraqi prime minister’s security office confirmed the rockets landed near the U.S. Embassy but a security source told ABC News there were no injuries.

The incident took place just after midnight Thursday in Iraq — and Wednesday evening in Washington, D.C. — and it was not immediately clear from where the rockets were launched.

Rocket attacks are common in the area; Iraqi military sources reported at least one rocket landed near the U.S. Embassy on Saturday.

The most recent rocket strike came a day after more than a dozen missiles launched from Iran struck two Iraqi military bases where U.S. forces were stationed early Wednesday. The missiles were in retaliation for the death of Iranian Revolutionary Guard commander Qassem Soleimani who died in a U.S. airstrike at Baghdad’s international airport on Friday.

On Wednesday, Trump said Iran appeared to “stand down” after the attacks on Tuesday and promised new sanctions for Tehran as a result of the conflict. 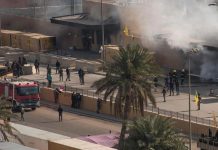 Protesters in Iraq surround U.S. embassy for a second day 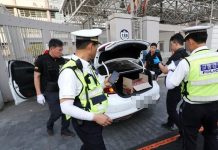 Man arrested for crashing his car into U.S. embassy in Seoul