The eight-wheeled vehicles, known as Hunter and Killer, were tested between April 3 and April 13 during the 2017 Maneuver Fires Integrated Experiment, or MFIX. They are designed to travel through various types of terrain and provide operators with aircraft detection and tracking capabilities.

Army officials note the program is aimed at reducing the workload for ground forces.

“We want to see how we can automate the software to reduce the task-saturation of the soldier,” program strategist Scott Patton said in a press release. “We want to reduce their workload. We want [Soldiers] just to be forward observers. If they have to get into these other domains, they can do it for a minute or two, let the software do the thinking for them, and then they go back to their domain.”

The Hunter and Killer vehicles, still in their early development phases, are designed to perform cross-domain functions. In addition to tracking aircraft activity throughout the battlespace, they can also call precision fires in an automated fashion, and allow operators to communicate with friendly planes for support.

The vehicle also has maritime applications, and can contact nearby ships to attack a target. 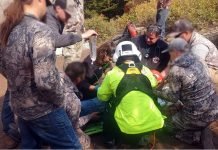