March 26 (UPI) — A U.S. Army veteran who served two tours in Iraq was deported to Mexico for a felony drug conviction, Immigration and Customs Enforcement officials confirmed on Sunday.

Miguel Perez, 39, was escorted across the Texas-Mexico border on Friday, CNN reported.

“I’m not leaving. They’re taking me,” Perez told the Chicago Tribune shortly before his deportation.

Perez, who had lived in Illinois since he was 8, enlisted in the U.S. Army just before 9/11 and was discharged in 2004. He said he suffered from PTSD from his tours in Afghanistan, which led to a substance abuse problem.

In 2010, he was convicted of delivering less than 100 grams of cocaine and served half of a 15-year sentence.

But upon his release last year, he was handed over to ICE officials for deportation.

Since then, he had been trying to fight his pending deportation. But his attempts to gain legal residency were denied by immigration officials because of his drug conviction.

Perez’s plight garnered the support of Illinois officials, including Iraq War veteran Sen. Tammy Duckworth, D-Ill., who said Perez’s case “is a tragic example of what can happen when national immigration policies are based more in hate than on logic and ICE doesn’t feel accountable to anyone.”

“At the very least, Miguel should have been able to exhaust all of his legal options before being rushed out of the country under a shroud of secrecy,” Duckworth added.

Perez told CNN that he fears Mexican drug cartels will attempt to recruit him and kill him if he refuses to cooperate.

“If they are sentencing me to a certain death, and I am going to die, then why die in a place that I have not considered my home in a long time?” he said.

Perez is one of many U.S. military veterans who have been deported in recent years.

Precise numbers have not been released, but Rep. Vicente Gonzalez, D-Texas, told the Rio Grande Guardian last year that he estimates the number of veterans deported in recent years is “about 1,400 — mostly to Mexico and Central America.”

471 parents deported without their children during family separations 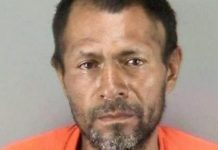