British investigators on Monday said they found that the Reynobond PE panels combined with the insulation were flammable and contributed to the spreading of the June 14 fire that killed at least 79 people in west London. The Reynobond PE panels are one of Arconic’s many products, but it is not the most fire-retardant.

Arconic, which was created after the Pittsburgh-based Alcoa split operations in 2016, said it was pulling its product due to the “inconsistency of building codes across the world.” The Reynobond PE panels used in the Grenfell Tower are cheaper than the fire-resistant version.

“Arconic is discontinuing global sales of Reynobond PE for use in high-rise applications,” the company said in a statement. “We believe this is the right decision because of the inconsistency of building codes across the world and issues that have arisen in the wake of the Grenfell Tower tragedy regarding code compliance of cladding systems in the context of buildings’ overall designs. We will continue to fully support the authorities as they investigate this tragedy.”

Arconic pulled its product as the British government said every building it has tested so far — 75 buildings in 26 council areas — have failed fire safety tests.

British investigators said the Grenfell Tower fire began when a fridge in a fourth-floor apartment caught fire. The building’s cladding fueled the flames as they rapidly ascended and engulfed most the 24-story building.

The national and local government, including a local council called the Royal Borough of Kensington and Chelsea, have been criticized for the response to the fire and for the alleged neglect that led to the massive fire.

British Prime Minister Theresa May on Thursday said that up to 600 high-rise British buildings may have combustible exterior cladding.

London Mayor Sadiq Khan on June 18 said the Grenfell Tower fire in which dozens died was a “preventable accident that didn’t need to happen” caused by the “consequence of mistakes and neglect” from officials. 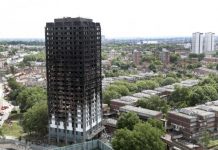 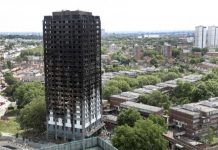 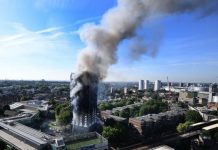