April 28 (UPI) — There have been more than 1 million cases of the coronavirus disease in the United States since the start of the pandemic, experts said Tuesday.

Trackers at Johns Hopkins University updated its national tally early Tuesday afternoon to show about 1,002,500 cases. Experts at the school, who have been tracing global cases for weeks, say there have been more than 57,200 deaths in the United States.

The school says more than 5.6 million tests have been administered nationwide.

Earlier, New York Gov. Andrew Cuomo said in his briefing coronavirus figures in his state are on a steady decline. He reported the latest single-day death toll of 335 and said new hospitalizations fell below 1,000 for the first time in a month.

“This number is basically reducing, but not at a tremendous rate,” Cuomo said. “The only thing tremendous is the number of New Yorkers who still pass away.”

Although several other states have begun permitting non-essential businesses to reopen, Cuomo said that’s the goal for his state, but doing so must remain secondary to a potential surge in cases or “overwhelming the hospital system.”

He outlined a 12-point plan for a controlled reopening that requires local officials to demonstrate a continual decline in cases over a two-week period.

New York City Mayor Bill de Blasio on Tuesday reported nearly 2,900 new cases and more than 250 additional deaths. To date, there have been about 156,100 cases in the city.

At his daily briefing, the mayor unveiled a new grading policy for public school students affected by the coronavirus-related closures. Under the new system, students from kindergarten through grade 5 will receive “meets standards” or “needs improvement” ratings rather than traditional letter grades.

Students in grades 6-8 will receive those two designations or “course in progress.” High school students will see letter grades, grade point average and options of “passing” and “course In progress.”

“The goal here is not to fail students,” said New York City Schools Chancellor Richard Carranza. “The goal is to have students master the subject matter.”

In Florida, health officials reported the greatest single-day death toll yet, 83, pushing the the state total to 1,171. They also reported a surge of 700 new cases, pushing the total to nearly 33,000.

In Georgia, suburban Atlanta transit workers are threatening to walk off the job Thursday due to safety concerns.

The union representing employees of Transdev, which operates Gwinnett County Transit service, said they’re at risk due to a lack of protective gear for bus drivers. They also demand that passengers wear masks and clear shields for separation. 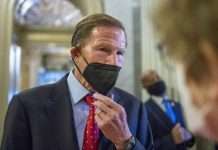