June 8 (UPI) — The U.S. economy is officially in a recession caused by the coronavirus pandemic, the National Bureau of Economic Research said Monday.

“The unprecedented magnitude of the decline in employment and production, and its broad reach across the entire economy, warrants the designation of this episode as a recession, even if it turns out to be briefer than earlier contractions,” the committee said in a statement.

A recession is usually declared after two consecutive quarters of negative growth in U.S. production, but the committee said a “significant decline” started in February.

“In deciding whether to identify a recession, the committee weighs the depth of the contraction, its duration, and whether economic activity declined broadly across the economy,” the committee said.

The private non-profit research organization, based in Cambridge, Mass., is made up of economists from major universities and is known for identifying the starts and end dates of economic recessions.

The pandemic caused a sudden drop in economic activity spread across the economy, “normally visible in production, employment, and other indicators,” the bureau said.

Data from the U.S. Bureau of Labor Statistics confirmed that the labor market peaked in February, the committee said. The amount of consumer spending, called real personal consumption rates, also peaked in February and then dropped.

More than 42 million United States workers have filed for unemployment benefits since the pandemic began, and stay-at-home orders closed many businesses for weeks to keep the virus from spreading.

But the report did not address the official U.S. Labor Report, released Friday, which surprised economists by showing that job losses were lower than expected in May and 2.5 million jobs were added while the national unemployment rate declined.

Economists are mixed about whether the economic effects of the pandemic will be far-reaching.

Last week, the U.S. Congressional Budget Office predicted in a report that the pandemic’s economic toll could last more than a decade and cost the economy $8 trillion, or three percent of total gross domestic product.

But the federal agency said that the economic situation was unprecedented and that more research would have to be done to adjust predictions of the economic toll in the future. 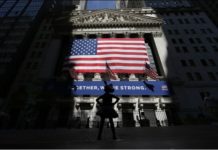 U.S. economy declined in 2nd quarter by largest margin ever