March 27, 2020 (UPI) — The United States surpassed 1,000 deaths due to the COVID-19 outbreak Thursday as it became the country with the most known cases in the world.

There were 1,178 deaths related to the coronavirus in the United States as of Thursday evening and the United States overtook Italy and China with 82,404 cases of the virus, according to figures from Johns Hopkins University.

New York has become the epicenter of the pandemic in the United States with just over 37,000 cases as of early Thursday — about half the total number of cases in the country.

New York Gov. Andrew Cuomo said 100 people died from the virus in the state from Wednesday morning to Thursday morning bringing the state’s death toll to 385.

The number of patients hospitalized in the state surged by 40 percent to 5,300. Health officials expect New York will need 140,000 hospital beds and 40,000 intensive care units when the wave of infections reaches its apex in the coming days.

During his daily briefing in Albany, N.Y., he said the $2.2 trillion package before Congress was “irresponsible” and “reckless” for not covering an expected $15 billion revenue shortfall the state is facing due to its all-out coronavirus response measures.

The relief package was approved by the U.S. Senate late Wednesday and Speaker Nancy Pelosi said the House will vote on it Friday. President Donald Trump has said he will sign it.

Pelosi said Thursday she’s seeking more funding for state and local governments in the measure before the vote.

As currently drafted, New York would receive $5 billion under the bill — not nearly enough to make up for its emergency spending, Cuomo said.

“I’m disappointed, I said I was disappointed. I find it irresponsible, I find it reckless,” he said. “When this is over, I promise you I’m going to give them a piece of my mind.”

The growing crisis has led to orders to stay at home for millions of Americans in 20 states.

The virus’ economic toll was reflected Thursday in a Labor Department report that noted a historic surge of jobless claims last week. The report cited 3 million new claims, for a total of 3.3 million, which is the largest single-week increase in history.

States have also been shutting the doors of their schools amid the outbreak, with Maryland on Wednesday extending its closure. Superintendent Karen Salmon said Maryland schools will stay closed for four more weeks. The state has more than 400 cases and four deaths.

“The reality is this crisis is really just beginning here in our state and across America,” Gov. Larry Hogan said, warning residents the numbers will increase. 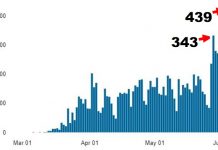 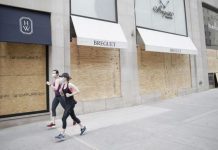 Labor Dept.: 1.9M more in U.S. have filed for unemployment