Pompeo released the report alongside adviser to the president Ivanka Trump. Joining them were the 2019 TIP Heroes honorees, who advocate and help trafficking victims around the world.

“Every individual in every individual country must confront this challenge on its own sovereign territory,” Pompeo said. “Many victims never leave their hometowns.”

An estimated 24.9 million people around the world are trapped by labor or sex trafficking.

The crowd at the event included human-trafficking survivors.

“You are all heroes. This is a very special morning,” Pompeo said. “You are all standing up to ensure that no one else suffers the abuse that you endured. We are inspired every day by your courage.”

“Human trafficking is a strain on all of humanity,” Pompeo said. “We cannot fall short on this challenge.”

U.S. Ambassador for Trafficking John Cotton Richmond said the report explains how countries, including the United States, can disrupt, uncover and prevent human trafficking from ever taking place.

“Their crime strikes at the fundamental truth that every person has value,” Richmond said.

Pompeo highlighted some of the ways people and governments can fight human trafficking.

Individuals can learn the indicators for human trafficking and call in suspicious activities to local authorities or the national hotline. Businesses can stop using forced labor in their supply chains. First responders can get better training to screen potential trafficking victims. Government leaders can prioritize investigating and prosecuting labor and sex trafficking cases. 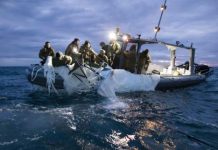 China: Balloon in U.S. airspace is civilian weather airship that blew off course