Aug. 7 (UPI) — Kevin Durant guided Team USA to an 87-82 win over France in Saturday’s men’s basketball final at Saitama Super Arena, giving the Americans their fourth straight gold medal in the sport and the United States its 100th medal at the Summer Games in Tokyo.

Durant, who helped the U.S. capture gold in 2012 and 2016, scored 21 of his 29 points in the first half to pace Team USA. He sank the Americans’ final two free throws to seal the victory against France, which had beaten the United States in the 2019 World Cup and two weeks ago to begin the Olympics.

“We went through some real adversity,” said Durant, who joined Carmelo Anthony as the only three-time gold medalists in men’s basketball. “We just fought through everything. I’m glad we finished the job.”

Jayson Tatum, of the Boston Celtics, sank two critical 3-pointers in the fourth quarter and finished with 19 points. Damian Lillard of the Portland Trail Blazers and Jrue Holiday of the Milwaukee Bucks added 11 points each.

Evan Fournier scored 16 points for France, but he was just 5-of-15 from the field. Rudy Gobert notched 16 points and eight rebounds.

With the loss, France will settle for silver at the Tokyo Games. The French national team also finished second to the United States in 1948 and 2000.

The United States now earned 100 total medals — 32 of those gold — at the 2020 Tokyo Olympics, by far the most out of the participating delegations. China, which has the most gold medals at the Games with 37, sits second with 81 total medals. 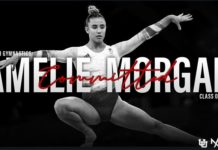 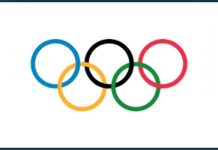 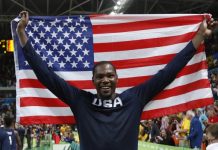