March 23 (UPI) — The United States has become the nation with the third-largest number of coronavirus cases — more than 35,000 — and the surgeon general said Americans who aren’t following heath advice are making the situation worse.

According to a running count by experts at Johns Hopkins University, the United States now has more than 35,200 cases of COVID-19, behind only China (81,400) and Italy (59,100) in the total number of patients.

The Johns Hopkins University count says more than 473 U.S. patients have died and more than 100,400 around the world have recovered. On Monday, China for the fifth straight day reported no new local cases.

New York City is the U.S. location with the most recorded coronavirus deaths, at 99. King County in Washington state has 75. Thirty-four others have been recorded elsewhere in New York state.

As it has in other countries, the highly contagious coronavirus has spread rapidly in the United States. Part of the problem, health officials say, is that many Americans still aren’t heeding advice to stay at home and stop congregating in large groups.

Adams said it seems to be younger Americans who are most ignoring the advice.

Monday, President Donald Trump thanked Americans for “pulling together” for “doing what they have to do.”

Over the weekend, crowds of people were seen filling beaches and parks in California, against a shelter-in-place order from Gov. Gavin Newsom last week. Spring breakers have been doing the same in Florida, a traditional hot spot this time of the year.

Los Angeles Mayor Eric Garcetti said Sunday he will shut down sports and recreational activities at all city parks and parking at beaches will be closed. He also said the U.S. Navy hospital ship Mercy is headed to the Port of Los Angeles to help provide medical care.

“The ship will bring more than 1,000 beds to our doorstep. This step will save lives,” he tweeted.

New York City Mayor Bill de Blasio said Monday the 11 public hospitals in his city only have enough critical supplies to last for the rest of the week. He said he spoke with Trump and Vice President Mike Pence on Sunday, urging them to do whatever possible to send much-needed ventilators to the nation’s most populous city.

“What I need right now is action, not words, and every day counts,” he said.

De Blasio also warned that even as medical facilities are being expanded, there probably isn’t enough healthcare personnel to fully staff them. 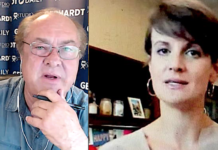