July 14 (UPI) — Planned raids targeting about 2,000 undocumented immigrants with court orders for removal began this weekend in nine, according to a U.S. official.

New Orleans was also set to be included among the cities where raids are taking place, but the city tweeted on Thursday that immigration enforcement would be temporarily suspended through the weekend in areas affected by Tropical Storm Barry.

Immigration and Customs Enforcement spokesman Matthew Bourke told CNN that the agency won’t comment on operational details of the raids, but added it is focusing primarily on immigrants it considers dangerous.

“ICE prioritizes the arrest and removal of unlawfully present aliens who pose a threat to national security, public safety and border security,” he said.

“At this point, we have no choice but to go out and execute those lawfully issued orders from an immigration judge,” he said.

Before being deported, those rounded up might end up in government and privately run detention centers.

Administration officials have considered placing them in hotel rooms because of limited space in ICE detention centers, ABC News reported. Officials with Marriott, the world’s largest hotel chain said they would not allow ICE to use the company’s properties as detention centers.

“The adult single men areas were clean but crowded — also loaded up with a big percentage of criminals … Sorry, can’t let them in our country,” Trump wrote. “If too crowded, tell them not to come to USA and tell Dems to fix the loopholes. Problem Solved!”

While Pence toured the facilities on Friday a group of men detained behind a chain link fence shouted “no shower, no shower!” and reporters said the facility smelled “horrendous,” NBC News reported.

Most of the approximately 800 detainees at the 1,000-capacity Donna, Texas, facility Pence visited were lying on mats on the floor.

Pence said afterward that he witnessed evidence of a “system that was overwhelmed.”

He added, however, that descriptions of poor and inhumane treatment by Customs and Border Protection officials were “slanderous,” adding he was impressed by the “compassionate work” of CBP workers at the facility. 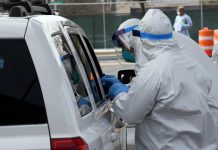 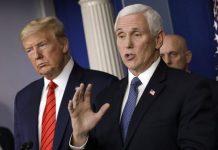