WASHINGTON, Oct. 3 (UPI) — The United States announced Monday it has suspended bilateral talks with Russia on a cease-fire in Syria, claiming the Russians have not “lived up to their commitments.”

The U.S. State Department said it came to the conclusion that breaking off talks was necessary as Russia and the Syrian government continue to pursue a military course that has included attacking civilian areas, targeting critical infrastructure and preventing humanitarian aid from reaching people in need.

“This is not a decision that was taken lightly,” John Kirby, spokesperson for the U.S. Department of State, said in a press release. “The United States spared no effort in negotiating and attempting to implement an arrangement with Russia aimed at reducing violence, providing unhindered humanitarian access, and degrading terrorist organizations operating in Syria, including Daesh and al Qaeda in Syria.”

Tensions have been high between the United States and Russia since a humanitarian convoy near Aleppo, Syria, was attacked on Sept. 19. Talks have slowly broken down since then.

“I think everybody’s patience with Russia has run out,” White House Press Secretary Josh Earnest said today during his daily press briefing. “They’ve also spent a great deal of credibility without any indication they were committed to following through.”

While the State Department said today it would halt talks and withdraw personnel dispatched to establish a joint implementation center, Russia claims communication stopped before Kirby’s statement was released.

“All contacts between the military have been stopped of late, there has been no exchange of information,” Gennady Gatilov, Russia’s deputy foreign minister, told Russian state-controlled news agency TASS. “We are trying to agree with [the] Americans on resumption of truce in Syria.”

Russian President Vladimir Putin expressed concern in mid-September about the alliance in Syria, suggesting the United States had been making conflicting statements about its goals and criticizing it for keeping details of the cease-fire deal secret.

Russia entered the Syrian Civil War in September 2015 with airstrikes in support of the government of President Bashar al-Assad. The United States, meanwhile, has been supporting the rebels in Syria, and has insisted that any peace agreement reached in Syria must include Assad’s departure from power. 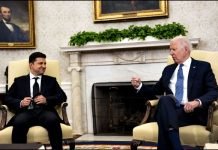