April 8 (UPI) — The United States and Iraq on Wednesday reached an agreement on the eventual withdrawal of U.S. combat troops from the nation.

In a joint statement following the conclusion of the third round of talks between the United States and Iraq known as the Strategic Dialogue — the first two of which were conducted under the Trump administration — the two sides agreed the U.S. military presence would begin to shift to a non-combat role.

“Based on the increasing capacity of the [Iraq Security Forces], the parties confirmed that the mission of U.S. and Coalition forces has now transitioned to one focused on training and advisory tasks, thereby allowing for the redeployment of any remaining combat forces from Iraq, with the timing to be established in upcoming technical talks,” the statement said.

The statement went on to say that the transition of U.S. and other international forces away from combat operations “reflects the success of their strategic partnership” to combat the presence of the Islamic State terror group in Iraq.

About 2,500 U.S. troops remain in Iraq helping the ISF combat the IS, according to the Pentagon.

Pentagon press secretary John Kirby told reporters there was “no specific agreement of a date certain or a certain number of troops by a certain date,” but assured the United States has never intended to keep troops in Iraq indefinitely.

“I think we all realized when we were invited in by the government of Iraq, that this mission was aligned against ISIS and that there was no expectation that it was going to be a permanent, enduring mission or footprint,” said Kirby, using an alternate abbreviation for the terror group. 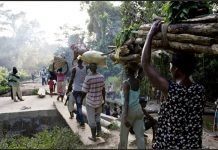