OXFORD, Miss., Oct. 26 (UPI) — The University of Mississippi on Monday removed its state flag—which contains the controversial Confederate mark—following a strong outpouring of criticism from student leaders, the school said.

Mississippi’s flag has borne the Confederate battle symbol for decades, but Monday the university said it reached a point where it decided the flag doesn’t reflect well on the Oxford campus.

“The University of Mississippi community came to the realization years ago that the Confederate battle flag did not represent many of our core values, such as civility and respect for others,” Interim Chancellor Morris Stocks said in a statement Monday. “Since that time, we have become a stronger and better university. We join other leaders in our state who are calling for a change in the state flag.”

The state’s flagship university follows other entities, like Walmart and South Carolina, that have also removed the Confederate flag from their premises.

The flag will be preserved in the University Archives along with resolutions from students, faculty and staff calling for its removal, the university said.

Officials have discussed the possibility of changing Mississippi’s flag altogether, because it features the Confederate mark in the upper left corner.

The school said its Associated Student Body Senate supported the removal of the flag from campus, and about 200 supporters demonstrated against the flag’s presence during a rally on Oct. 16.

“Mississippi and its people are known far and wide for hospitality and a warm and welcoming culture. But our state flag does not communicate those values,” Stocks said. “Our state needs a flag that speaks to who we are. It should represent the wonderful attributes about our state that unite us, not those that still divide us.” 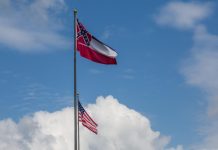 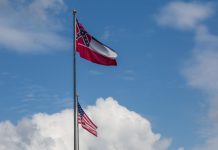