KUKUWA-GARI, Nigeria, Aug. 18 (UPI) — Boko Haram militants killed up to 150 villagers in an assault on a village in northeastern Nigeria’s Yobe state last week, according to witnesses.

The attack on Kukuwa-Gari occurred Thursday, but news of the massacre was slow to reach outsiders due to years of militant destruction to the area’s telecom lines.

Local residents told reporters most of the victims had been shot or drowned in a rain-swollen river while fleeing the assault. A government official put the number of dead at 50.

Word of the attack comes the same day Nigerian President Muhammadu Buhariannounced measures to increase security in the country, including the recruitment of an extra 10,000 police officers, the installation of CCTV monitoring systems in major cities, and the formation of a multi-agency anti-terrorism task force.

The African Union earlier this year endorsed a multinational task force to combat Boko Haram, but the 8,700-strong contingent from Nigeria, Cameroon, Benin, Chad and Niger was delayed for months.

Buhari took office in May, vowing to fight corruption and destroy Boko Haram, but suicide attacks in crowded locations in the region have been on the rise ever since.

Six years after beginning its campaign to establish an Islamic government in Nigeria, Sunni terrorist group Boko Haram has killed more than 17,000 people, according to Amnesty International. 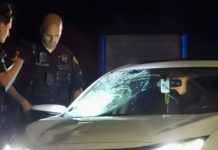