“The number of highly likely dead remains at 11, but may rise,” Sussex Police’s Assistant Chief Constable Steve Barry said. “However, we do not expect that figure to be greater than 20, probably fewer.”

Andy Hill, 51, the aircraft’s pilot, remains hospitalized under critical condition. He was placed in a medically induced coma, according to his family.

The original estimate of the crash was seven deaths. Recovery teams began gathering bodies on Saturday soon after the plane crashed while attempting an airborne maneuver.

Matt Jones, 24, and Matthew Grimstone, 23, a soccer player for the Worthing United team, were the first confirmed deaths.

The removal of bodies may continue through Monday, according to Barry.

The Royal Air Forces Association, which organizes the air show event, defended its safety record, according to BBC News.

“Pilots and aircraft must meet rigorous safety requirements,” which are regularly reviewed to ensure the “highest possible levels of protection,” according to the association, adding it took “safety arrangements very seriously” before the annual event.

Hill was flying a Hawker Hunter — a subsonic military jet widely used by the Royal Air Force during the 1950s and 1960s — when he lost control of the aircraft and plunged to the ground on the A27 motorway.

The plane exploded into a massive fireball and Hill ejected, the Royal Air Force Association said. 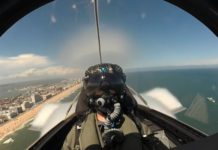 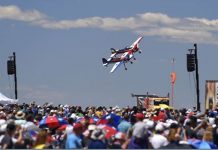