Rod Spurgeon told NBC News and CNN of the policy change after the USPS faced criticism for removing the boxes. Some Democrats, including former Vice President Joe Biden and Sen. Ron Wyden, D-Ore., accused the agency of operating under the Trump administration to suppress mail-in voting.

“We are not going to be removing any boxes,” Spurgeon said late Friday. “After the election, we’re going to take a look at operations and see what we need and don’t need.”

“Ever since the pandemic came along, people are mailing less for some reason,” he said.

Critics, though, said fewer collection boxes mean fewer locations for people to drop off their mail-in ballots for the Nov. 3 election.

“Donald Trump isn’t *trying* to sabotage our elections. He’s doing it right under our noses. This is voter suppression and Senate Republicans are letting him get away with it,” Wyden tweeted Friday.

The USPS warned 46 states and Washington, D.C., that some mail-in ballots might not be counted in time for the election. The agency told the states their time frames and deadlines for mail-in voting would be “incongruous” with delivery standards, meaning some ballots might not arrive in time to be counted.

Meanwhile, President Donald Trump has said he opposed funding the financially struggling postal service because it would benefit those who seek to promote mail-in voting in November.

He and first lady Melania Trump just requested mail-in ballots from the Palm Beach County, Fla., supervisor of elections’ office, the Palm Beach Post reported Friday. The president and his wife have declared Florida to be their home state.

Democrats, in particular, have called for mail-in voting as a way to protect voters from the spread of COVID-19 on Election Day.

“They want $25 billion for the post office. Now, they need that money in order to have the post office work so it can take all of these millions and millions of ballots,” Trump said Thursday.

“Now, if we don’t make a deal, that means they don’t get the money. That means they can’t have universal mail-in voting,” he added. “They just can’t have it. So, you know, sort of a crazy thing.”

He backtracked on his comments later Thursday, saying he would sign a stimulus package that includes $25 billion for the agency, but only if Democrats give Republicans what they want in the relief legislation.

“Sure, if they gave us what we want. And it’s not what I want, it’s what the American people want,” Trump said during a Friday news conference.

The financially struggling USPS has been undergoing an organizational overhaul, including removing mail sorting machines from facilities across the country, some of which would normally be used to sort mail-in ballots, Vice reported.

“Package volume is up, but mail volume continues to decline. Adapting our processing infrastructure to the current volumes will ensure more efficient, cost-effective operations and better service for our customers.”

DeJoy, a Trump donor who was tapped to run the USPS three months ago, also has curtailed overtime at the agency, leading to delays in deliveries.

On Saturday protesters gathered outside DeJoy’s Washington, D.C. home, carrying signs reading “Don’t mess with the USPS” and “Don’t stamp out our democracy.” It is not clear whether he was home at the time. 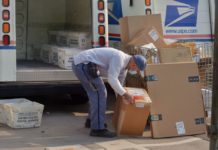 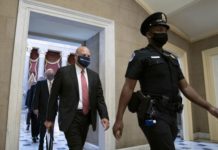 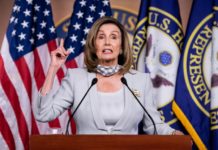