A crowd of 2,500 guests, including Giffords and her husband, former astronaut and Navy Capt. Mark Kelly, were on hand for the ceremony in Galveston, Texas, that put the USS Gabrielle Giffords into service.

Jill Biden, the ship’s sponsor and wife of former Vice President Joe Biden, gave the time-honored Navy tradition of ordering the crew to “man our ship and bring her to life!”

Remarks also were given by former Secretary of State Hillary Clinton and House Minority Leader Nancy Pelosi of California.

But the star speaker was Giffords, who sustained a brain injury after the shooting at a constituents event on Jan. 8, 2011, in Tucson, Ariz.

“I’m so happy to be with you today. This is an incredible honor,” Giffords said in a brief speech. “The USS Gabrielle Giffords is strong and tough just like her crew. Despite danger, you say ‘yes.’ You make me proud, you make America proud. I will never forget this day or this crew.”

The Arizona Democrat resigned from her seat in Congress in January 2012. Navy Secretary Ray Mabus told her of plans to name a ship after her.

Giffords helped christen the 418-foot ship in 2015, where it was built in Mobile, Ala.

It’s the ninth ship in the series of high-speed vessels to navigate in shallow coastal regions known as littoral waters.

USS Gabrielle Giffords will depart Galveston and sail to her homeport at Naval Base San Diego.

“All of us admire her courage and her tenacity and in the Navy we need our sailors to be tough and resilient and so her example is what we hope sailors gain — her inspiration,” said Adm. William Moran, vice chief of Naval operations, who delivered the principal address.

Gabrielle Giffords’ crew is just 73 at the ship’s commissioning.

“This is not just a new ship. This is a new class of ship and that makes it even more challenging for the crew,” Keith Woodley, the ship’s commander, said. “They have risen to that challenge and performed exceptionally well in getting this ship ready for service.”

The Navy’s newest warship cost $478 million and is armed with missiles and machine guns.

Giffords and Kelly founded the gun-control group Americans for Responsible Solutions in 2013.

“Those of you who know Gabby best know what connects her most to the USS Gabrielle Giffords is not the 418 feet of gray metal,” he said during the ceremony. “It’s not her top speed … not her shallow draft. … It’s not even Gabby’s name emblazoned on the back. It’s simply this: It’s the crew — the men and women and their shared commitment to a value more American than any other … that is service.” 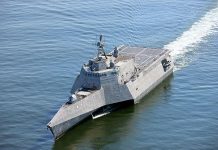