Jan. 19 (UPI) — Investigators believe Stephen Paddock acted alone when he opened fire on a crowd of concert-goers from a Las Vegas hotel in October and don’t plan to file charges against his girlfriend, the Clark County sheriff said Friday.

Sheriff Joe Lombardo briefed the public on a preliminary report about the Oct. 1 shooting, which left 58 people dead. Previous reports said more than 500 people were injured in the attack at the Route 91 Harvest Festival, but the new report confirmed 851 people were directly injured in the shooting.

A full report is expected by the end of this year.

Though investigators don’t plan to charge Paddock’s girlfriend, Marilou Daniel, Lombardo said the department was investigating one other person and charges could be filed within the next two months.

The sheriff said investigators were working to determine a motive, but believe Paddock’s loss of a “significant amount of wealth” played a factor.

Police have been unable to find a missing hard drive from Paddock’s computer. They did find research on SWAT and tactical behavior and child pornography in his computer’s website search history.

The preliminary report includes a timeline of events beginning when Paddock checked into the Ogden hotel in Las Vegas weeks before the shooting and ending with when he was discovered dead with a self-inflicted gunshot wound to the head.

“We will learn from this incident and do whatever we can to prevent something like this from happening again,” Lombardo said. 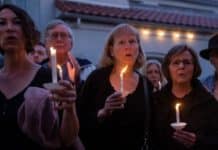