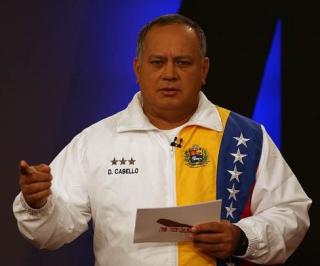 Cabello accused the executives of continued aggravated defamation in a legal proceeding. The media representatives must report to authorities weekly.

Many of the media heads have not been notified or cited, but Manuel Antonio Puyana, a director of the Tal Cual outlet, has confirmed the case.

“As we are currently defendants I am constantly going to court, I found out the case was ratified May 5 so I went to present myself and I signed the acceptance form part of the accusation,” Puyana said.

Court documents originally presented on April 23 quote Cabello as stating the media organizations have affected his reputation and honor by echoing “unscrupulous” publications from the ABC daily newspaper in Spain.

“Everyone on the board of directors is accountable to me … They’re not going to come to me to say that they wrote it only because a newspaper in Spain wrote it, the newspaper of Spain will also have to answer for that and show that what they said was true there. I’m just trying to defend myself as an ordinary citizen,” the document quotes Cabello.

The original article by ABC published in January reported that Leamsy Salazar, Cabello’s former head of security, implicated Cabello as one of the alleged leaders of the drug trafficking group Cartel of the Suns.

There have been 21 legal claims against journalists by the Venezuelan government since April 2013, the start of President Nicolas Maduro‘s term.

Marien Gracia Chirinos, coordinator of the Freedom of the Press and Society Institute, said Cabello’s actions are “contrary to the provisions of the Constitution of the Bolivarian Republic of Venezuela and also the penalties for libel and slander are prohibited by international conventions protecting the right to freedom of expression.”

Gloria Salazar, coordinator of the Observatory for Freedom of Expression of the Public Space, said the cases against the media executives is “a threat; a kind of intimidation for the rest of the media in general and also for journalists.”

Venezuela ranks 137th out of 180 countries listed in the 2015 World Press Freedom Index by Reporters Without Borders.