Those supporting the National Assembly leader took to the streets calling for the fall of Maduro. Military forces loyal to President Maduro have responded at times with violence.

One demonstrator, Victor Zabala, 25, told The Guardian he was struck multiple times by rubber bullets. He accused the National Guard of also using live fire on groups of protesters.

In one video, military vehicles appeared to mow down Guaido supporters, who responded by throwing objects.

Guaido called for non-violent protests to support what he called “Operation Liberty.” He made the announcement in a video in which he is flanked by Venezuelan military forces.

“People of Venezuela, the end of usurpation has arrived,” Guaido said in the video, taken at the La Carlota air base.

“At this moment, I am with main military units of our armed forces, starting the final phase of Operation Liberty. People of Venezuela, we will go to the streets with the armed forces to continue taking the streets until we consolidate the end of usurpation, which is already irreversible,” he continued, calling for nationwide demonstrations for Wednesday.

Leopoldo Lopez, a key Venezuelan opposition leader who’d been under house arrest, appeared to stand behind Guaido in the video.

“We reject this coup-like movement that seeks to fill the country with violence. The pseudo political leaders that are heading the subversive movement have employed troops and police with war weapons in a street of the city to create terror,” he added.

“The U.S., with its meddling and coup-waging, looks to wreak violence and death in Venezuela, caring only about its interests and nothing about the human loses,” Morales said. “We must be united on our guard so that the coup-perpetrators never return to our region.”

“The United States stands with the People of Venezuela and their Freedom!” he tweeted.

U.S. national security adviser John Bolton called for a peaceful transfer of power and said it was “a very serious situation.”

“This is clearly not a coup,” he added because the United States views Guaido as the leader of Venezuela. 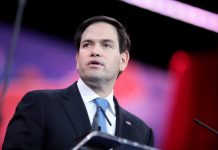