Aug. 21 (UPI) — Relatives of the 13 people Joseph DeAngelo pleaded guilty to murdering faced him in a California court Thursday, telling the so-called “Golden State Killer” how his crimes affected their lives for decades.

The relatives delivered impact statements during the hearing at the Sacramento County Superior Court. A judge will hand down DeAngelo’s sentence on Friday.

DeAngelo, 74, pleaded guilty in June to 13 counts of first-degree murder and more than 25 other counts including kidnapping, weapons and burglary charges in multiple California counties.

The pleas were part of a deal that allowed him to avoid the death penalty if he admitted to other uncharged crimes. The statute of limitations had expired for dozens of sexual assaults he’s accused of so he couldn’t be prosecuted for them.

DeAngelo has been linked to at least 45 rapes and hundreds of burglaries over 30 years in Sacramento, the Central Valley and Southern California. He’s also known as the “East Area Rapist,” “Original Night Stalker,” “Visalia Ransacker” and “Diamond Knot Killer.”

DeAngelo shot and killed journalism professor Claude Snelling in front of his daughter Elizabeth Snelling, who spoke in court Thursday, in front of their home in Visalia Calif., on Sept. 11, 1975.

Elizabeth Snelling, who was 16 at the time, said her father twice caught DeAngelo looking into her bedroom window and tried to chase him down but was unable to catch him. On Sept. 11, DeAngelo broke into her room wearing a ski mask, pointed a gun at her head and told her “he was taking me with him and if I made any noise he would kill me.”

Her father rushed out of the house to confront DeAngelo, who shot him two times before kicking her in the head and face and running off. Snelling’s father died from the gunshot injuries at the age of 45 and Snelling said her family stayed in the same house with “added security” while she slept in her mother’s room for the next year.

“Knowing that my dad’s murderer was never caught … left us all feeling very vulnerable,” Snelling said. “Since I was the only living witness … there was a chance he could come after me. The police gave us extra security adn patrolled our neighborhood … but I still lived in fear.”

Jennifer Carole, whose parents, Charlene Smith and Lyman Smith, were killed by DeAngelo in 1980, said that she was a suspect in the case for two days and “lived with the shame for decades.”

“Joe sitting here with his blank face, to ignore what he’s done to not validate his victims … is not justice,” Carole said. “Joe spending the rest of his life in prison is not justice … justice is not possible in this case.”

Debbi McMullen, whose mother Cheri Domingo and her boyfriend Gregory Sanchez were killed by DeAngelo in 1981, said she sank into an undiagnosed depression for years after her mother’s death.

“Mom would have helped,” she said Thursday. “She would have supported me and guided me toward solutions. She would have prodded me into admitting that I needed help.”

Michelle Cruz testified that she lost her identity after her sister Janelle Cruz was bound, raped and bludgeoned to death by DeAngelo in 1986.

Cruz said that she “cried and cried for hours” after learning DeAngelo had been arrested.

“I could stop looking over my shoulder with fears of him sneaking up on me,” Cruz said. “No more thinking he would try and find and kill me, too. I did not have to stop moving house to house — all things that haunted my mind for 32 years.

DNA evidence collected from genealogy databases uploaded by family members was used to arrest DeAngelo in 2018. Prosecutors from six counties consolidated cases with at least 25 counts against him.

Cheryl Temple, Ventura County’s chief assistant district attorney, told the Ventura County Star that the victim statements are “designed to enlighten all parties and the public to the swath of damage that violent predators leave in their wake.”

“They can be cathartic for victims to write and deliver, and they truly shift the focus from the defendant to the societal impact of crime,” Temple said.

DeAngelo’s rape victims also faced him in court on Tuesday and Wednesday.

Mary Berwert, who was 13 years old when she was raped in her home in 1979, said DeAngelo ruined her childhood and his prosecution lifted a weight from her shoulders.

“He stole my innocence, my security, threatened my life, threatened the lives of my family,” she said.

“Thirteen-year-old Mary needed justice. If only back then someone could have said to me with confidence that one day he’d be caught. I can’t help but think what a difference that would’ve made for my future.”

The “Golden State Killer” case was the subject of I’ll Be Gone in the Dark, an investigative book written by the late Michelle McNamara and a podcast of the same name featuring interviews with McNamara, her husband Patton Oswalt and others who worked on the book.

Oswalt, an actor and comedian, helped to get McNamara’s book published after her death in 2016. 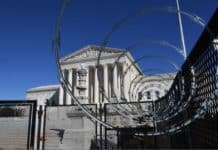 Mother arrested in connection with murder of 3 children under 5