Jamaica’s Prime Minister Andrew Holness shared a photo with Mosse-Brown, as he announced her death Friday and offered condolences.

“Our oldest person in the world Mrs. Violet Mosse-Brown has died. She was 117 years old,” he wrote. “Rest In Peace Mrs Mosse-Brown.”

Mosse-Brown, who was affectionately known as Aunt V, died at the Fairview Medical Center in Montego Bay, St James, at about 2:30 p.m., according to the Jamaica Observer.

She was born on March 10, 1900, and became the world’s oldest woman on April 15 after the death of Italy’s Emma Morano.

Her son, Barry Russell, 85, told The Gleaner she was taken to a doctor, who said she had an irregular heartbeat.

Mosse-Brown was scheduled to be visited by personnel from the Guinness Book of World Records prior to her death. 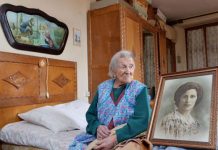