April 11 (UPI) — An 80-year-old man has been arrested for the murder of two women 46 years ago, Virginia Beach police said.

Ernest Broadnax, 80, was arrested Monday by New York police in New York and charged with two counts of second-degree murder and one count of rape.

The murders go back to 1973, when Lynn Seethaler and Janice Pietropola, both 19, from Pittsburgh, Pennsylvania, were vacationing in a Virginia Beach oceanfront motel cottage. Their bodies were found Saturday, June 30, and their deaths were ruled homicide by the Virginia State Medical Examiner’s Office, police said.

For years, Virginia police followed leads, but to no end. The cottage where the “violent” murders occurred was demolished and new motels and shops were built in its place.

“Unfortunately, the case turned cold after exhaustive measures failed to positively identify a suspect,” the police report said, adding that the case was then handed over to the department’s Cold Case unit.

Then in the fall of last year, investigators began to aggressively research a strong lead with the help of the Office of the Commonwealth’s Attorney, which brought them to Broadnax.

Virginia Beach police chief Jim Cervera told reporters Wednesday that it was the oldest cold case the department had solved. 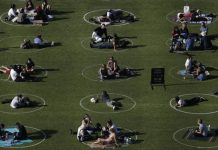 New York allows gatherings up to 10 people as cases ease