The federal funds come after years of record-setting wildfires that have burned millions of acres in California.

“We are at our best when local, state and federal government work together, unencumbered by politics or partisanship,” Harris said. “The people on the ground, doing this work every day, you inspire us all.”

Nearly 60% of California’s forests are national forests, with the infrastructure law providing billions for wildfire prevention to help protect them.

The Biden administration this week announced a comprehensive response to what it said is a worsening wildfire crisis. That plan includes a sharp increase in the use of controlled burns in forests to reduce the fuels that feed wildfires.

Harris and Vilsack received a briefing on wildfire prevention and mitigation at the Forest Service’s Del Rosa Fire station in San Bernardino on Friday afternoon, before delivering remarks.

In addition to funds for wildfire prevention, it includes $550 billion for transportation, broadband and utilities.

That includes $110 billion for roads, bridges and similar projects, $66 billion for freight and passenger rail and $39 billion for public transit systems. 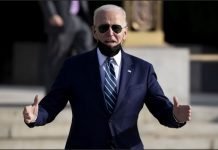