CAMBRIDGE, Mass., Oct. 5 (UPI) — The vast majority of black holes, whether supermassive or intermediate, are found at the centers of galaxies, but occasionally, a few are caught wandering.

One of those wanderers is XJ1417+52. Over the last 15 years, astronomers have used two space-based X-ray observatories, ESA’s XMM-Newton and NASA’s Chandra X-ray Observatory, to image the unanchored black hole.

Images confirm the mysterious X-ray source — located within an area known as the Extended Groth Strip — as the most luminous wandering black hole. In fact, XJ1417+52 is ten times more luminous than the previous record-holder. Astronomers classified the black hole as a “hyper-luminous X-ray source.”

But the black hole’s X-ray emissions aren’t as bright as they used to be. Its X-ray output peaked between 2000 and 2002. Since then, the black hole has grown slowly dimmer.

Black holes give off X-rays as they accrete and consume nearby gas and dust. Researchers believe XJ1417+52 became especially bright in the early aughts as a star passed too close and was pulled into the black hole’s accretion disk and shredded.

Scientists believe wandering black holes are the result of merging or colliding galaxies. As two galaxies come together, an altered and often asymmetric galactic structure — with one or more black holes no longer centrally positioned — is the result, at least in the short term.

XJ1417+52 is found on the outskirts of the galaxy GJ1417+52, but researchers believe the black hole likely once belonged to a smaller galaxy. With the smaller galaxy collided with GJ1417+52, it was stripped of its stars, but its black hole remained intact.

The analysis of XJ1417+52 is detailed in a new study, published this week in the Astrophysical Journal. 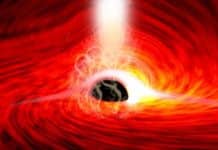 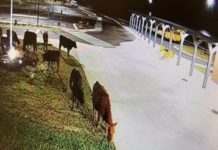