Aug. 13 (UPI) — Officials put a military base in Washington, D.C., on lockdown temporarily Friday after receiving reports of an armed man entering the location.

The lockdown at Joint Base Anacostia-Bolling was lifted about 2 hours after it began with the arrest of a suspect.

“Authorities have responded to the scene, and the threat of an armed individual on Joint Base Anacostia-Bolling has been cleared,” military officials posted on the base’s Facebook page. “The individual was detained and will be transferred to Metropolitan Police Department custody. First responders are still assessing the situation.”

The base said the man was last seen on the south side of the facility near Blanchard Barracks early Friday afternoon. He was seen entering the base after local police received reports of shots being heard in the area.

“If you encounter the individual and have a safe route, RUN. If you do not have a safe route to run, HIDE. Barricade your door, turn off the lights and your cellphone ringer, and remain silent. If you are hiding, prepare to FIGHT,” the base posted on Facebook in its announcement of the lockdown.

Authorities initially believed two armed people were on the base, but they later said they were searching for only one man. 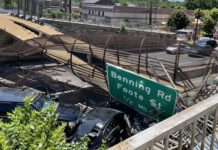