SALT LAKE CITY, UTAH – May 28, 2015 (Gephardt Daily) – The summer travel season is officially upon us and with it the annual reminder that air travelers are restricted from carrying certain items on board commercial airliners, including things that seem rather innocent, like cuticle scissors, small pocket knives, or too much shampoo.

And there are the other items that are prohibited on airliners, items you think people would know intuitively not to place in luggage, stuff like hand grenades, fully loaded machine pistols, and even artillery shells. But, amazingly enough that is not the case. 14 years after 9-11, a seemingly endless line of inadvertent morons and anti-authority malcontents continue to drag their makeshift arsenals through America’s airports, including Salt Lake International.

A new report, published by the Transportation Safety Administration, revealed more than fifty firearms, as well as a tank projectile, were seized by airport security screeners in the just the last month.

At Salt Lake International TSA agents even pulled a spear gun from a traveler’s bag.

News of the weapons’ seizures was first released on a TSA web blog.

The TSA’s findings are printed below: 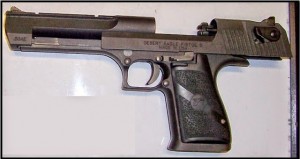 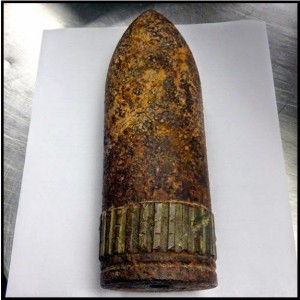 Inert Ordnance and Grenades etc. – We continue to find inert grenades and other weaponry on a weekly basis. Please keep in mind that if an item looks like a real bomb, grenade, mine, etc., it is prohibited. When these items are found at a checkpoint or in checked baggage, they can cause significant delays because the explosives detection professionals must respond to resolve the alarm. Even if they are novelty items, you are prohibited from bringing them on the aircraft.

Artfully Concealed Prohibited Items – Artfully concealed is a term used to describe an item that was intentionally hidden. It could be anything from a knife sewn into the lining of a bag to a sword hidden inside of a walking cane. If a concealed prohibited item is discovered in your bag or on your body, you could be cited and possibly arrested by law enforcement. Here are some examples from this week where artfully concealed items were discovered by our officers. 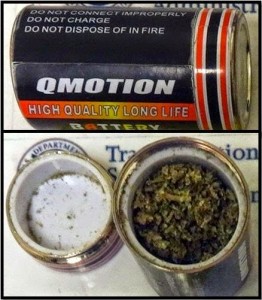 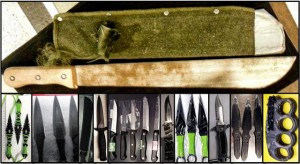 Ammunition – When packed properly, ammunition can be transported in your checked baggage, but it is never permissible to pack ammo in your carry-on bag.

*In order to provide a timely weekly update, this data is compiled from a preliminary report. The year-end numbers will vary slightly from what is reported in the weekly updates. However, any monthly, midyear or end-of-year numbers TSA provides on this blog or elsewhere will be actual numbers and not estimates.

You can travel with your firearms in checked baggage, but they must first be declared to the airline. You can go here for more details on how to properly travel with your firearms. Firearm possession laws vary by state and locality. Travelers should familiarize themselves with state and local firearm laws for each point of travel prior to departure.

Unfortunately these sorts of occurrences are all too frequent which is why we talk about these finds. Sure, it’s great to share the things that our officers are finding, but at the same time, each time we find a dangerous item, the line is slowed down and a passenger that likely had no ill intent ends up with a citation or in some cases is even arrested. The passenger can face a penalty as high as $11,000. This is a friendly reminder to please leave these items at home. Just because we find a prohibited item on an individual does not mean they had bad intentions; that’s for the law enforcement officer to decide. In many cases, people simply forgot they had these items.