Nov. 30 (UPI) — An Oregon woman who lost her wedding ring during a 1992 ski trip has the heirloom back on her finger after it turned up more than 2,000 miles away in Alabama.

Melisse De La Mare, of Portland, said she and her husband, Jim Gibson, had only been married a few months when she lost the wedding ring while skiing on Mount Bachelor in Bend, Ore.

De La Mare said the ring was especially precious because it had originally belonged to her mother-in-law.

“We lost something that meant something to the family, not from a monetary value point of view,” Gibson told KGW-TV.

Heather Langley, a jewelry maker in Bessemer, Ala., said a customer told her last summer about a ring he had found while working at Mount Bachelor in the early 1990s.

Langely used information from the customer and clues including first names engraved inside the band to locate and contact De La Mare.

The jeweler visited Portland to hand over the ring in person.

De La Mare said the ring still fits on her finger. She said she and Langely have become friends and are planning to get together next year when they are both visiting the East Coast. 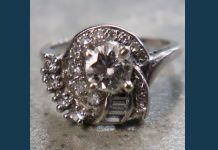