April 6 (UPI) — Sen. Joe Manchin, D-W.Va., on Monday asked the U.S. Centers for Disease Control and Prevention to launch a congressional investigation into the “alarming” rate of HIV in Kanawha County.

Manchin submitted the congressional inquiry request in a letter to Dr. Rochelle Walensky, director of the CDC, asking her to contact the Kanawha County Commission after reviewing its concerns no later than Friday “[g]iven the pressing public health nature of the issue.”

The inquiry submission came after W. Kent Carper, the commissioner of Kanawha County, which is home to the capital city of Charleston, asked Manchin to make the request following reports that his county has the “most concerning” HIV outbreak in the United States.

“If this premise is correct, a sense of urgency is required,” he wrote in the letter to Manchin.

In mid-February, Dr. Demetre Daskalakis, the director of the CDC’s Division of HIV/AIDS Prevention, held a virtual presentation for the Kanawha-Charleston HIV Task Force in which he said of the more than 3,000 counties across the country only four had more cases of HIV diagnosed in those who inject drugs than theirs.

According to the letter to Manchin, Daskalakis told the task force members that the county’s outbreak “is currently our most concerning in the United States among people who inject drugs.”

Daskalakis, who was not mentioned by name in the letter, said the county had seen 51 newly diagnosed HIV cases since Jan. 1, 2019, with 35 of those cases found last year.

Carper notes in his letter that Daskalakis’ findings are his own and while the task force respects his qualifications and expertise, they request further explanation.

“We are concerned that statements referring to the ‘HIV outbreak’ in Kanawha County as the ‘most concerning’ are being made without factual and empirical evidence,” Carper wrote. “The presentation went as far as to say that the Kanawha County increase is more significant than that seen in New York City.”

According to West Virginia health data, the average annual number of newly diagnosed HIV infections in the state was 81 as of 2017.

Health officials said its report on the state’s HIV epidemiologic profile that the state ranked 39th in lifetime risk of HIV diagnosis but that it “remains vulnerable to an HIV outbreak among persons who inject drugs.

Kanawha was among the state’s top five counties with 171 cases per 100,000 residents.

Between 2011 and 2016 there were 1,091 HIV cases, of which 169 were from injection drug use, according to a second report on the state’s HIV/AIDS Surveillance Report.

The surge in Kanawha has occurred after the Charleston health department canceled its needle exchange program in 2018.

The state is currently debating a bill that would require all needle exchange programs to require a license. 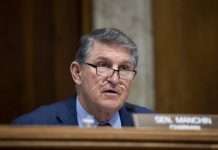