The denial follows recent reports that the intelligence community briefed House lawmakers on Russia interfering in the election in Trump’s favor.

O’Brien on Sunday said what he’s heard from the Federal Bureau of Investigation is that Russia is working to support Vermont Sen. Bernie Sanders to win the Democratic nomination as his presidential election would result in money diverted from the military to social programs.

“The Russians have always tried to interfere with elections because they want to divide Americans,” he said. “They want to undermine our democracy. But the idea that they want to influence the election and somehow cause the president to win, I just don’t see it.”

On Friday, Sanders said U.S. officials told him that Russia has attempted to meddle in the election to boost his bid.

“It was not clear what role they’re going to play,” he told reporters in Bakersfield, Calif. “We were told that Russia, maybe other countries, are going to get involved in this campaign — And look, here’s the message to Russia: Stay out of American elections.”

On Sunday night, Sanders held a commanding lead in Nevada’s Democratic primary, increasing his chances to take on Trump in the November election.

From the South Lawn before departing for a trip to India on Sunday, Trump congratulated Sanders and denied he had been briefed on Russia interfering to help the Vermont senator’s campaign.

“I have not been briefed on that at all,” he said. “Nobody told me about it.”

Asked if he was concerned about Russian interference, Trump said the Democrats, specifically Rep. Adam Schiff, were leaking information in their attempt to undermine Sanders, echoing accusations he has long made concerning Hilary Clinton beating the Vermont senator to head the Democratic Party in the 2016 presidential election.

“It sounds like it’s ’16 all over again for Bernie Sanders,” he said.

Trump also called for Schiff to be investigated over the leaked intelligence reports.

Schiff responded to Trump’s accusation, framing it as a “deflection” from his failure to protect the election from foreign interference.

“Your false claims fool no one,” Schiff said Sunday in a tweet. “You welcomed Russian help in 2016, tried to coerce Ukraine’s help in 2019 and won’t protect our elections in 2020.”

Schiff also accused the president of having fired Joe Maguire as acting national intelligence director for having briefed the lawmakers on Russian efforts to interfere in the election.

Trump on Thursday announced that U.S. Ambassador to Germany Richard Grenell would be taking over as acting director of national intelligence.

On Sunday, Trump said the decision was made because Maguire’s time was almost up.

“His time came up so he had to leave,” Trump said.

Following the 2016 presidential election, the U.S. intelligence community determined that Russia had meddled in the process to an extent not previously seen.

In a report, the intelligence community said Russia’s goals were to undermine public faith in the U.S. democratic process with “a clear preference” for Trump to win the election. 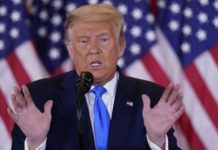