March 25 (UPI) — Senate leaders and the White House reached an agreement early Wednesday on a massive $2 trillion stimulus package aimed at spurring the economy and helping businesses and workers badly affected by the ongoing coronavirus pandemic.

“At last, we have a deal,” Senate majority leader Mitch McConnell, R-Ky., announced from the Senate floor early Wednesday. “After days of intense discussions, the Senate has reached a bipartisan agreement on a historic relief package for this pandemic.”

The agreement followed five days of negotiations between the Democrats, the Republicans and Treasury Secretary Steven Mnuchin, among others, as the package was unable to advance through the Senate as Democrats twice declined to sign off on it saying it focused too much on helping big corporations and didn’t do enough for workers.

Senate minority leader Chuck Schumer, D-N.Y., told the Senate that after nearly a week of “arduous” negotiations, they now have a bipartisan agreement on the largest rescue package in American history but its passing is not a moment of celebration but of necessity to help Americans suffering medically and financially due to the coronavirus that is rapidly spreading throughout the country.

“We have the anguish of the American people wondering about the future of their health, the health of their loved ones and of the economy necessitates us to do all we can to help them and help our country,” he said.

The legislation, the full text of which has not yet been released, includes an expansion to unemployment insurance that will see the salaries of every worker who is laid off due to COVID-19 remunerated by the federal government, checks of $1,200 sent directly to middle-class and below Americans, a $367 billion small business loan program, a $500 billion fund for industries and $150 billion earmarked for states and localities whose coffers are stressed by combating the virus.

It also includes $130 billion for hospitals, nursing homes and other health care facilities.

The Democrats, who had pushed back against giving corporations loans, were able to include measures to ensure “strict oversight, transparency and accountability” over them, Schumer said.

He said the agreement, though not perfect, “is really an outstanding agreement.”

McConnell said the agreement will rush resources to the frontlines of the United States’ fight against the coronavirus, describing the package as “a war-time level of investment into our nation.”

He said it will inject trillions of dollars into the U.S. economy as fast as possible to help workers and industry weather the hardships caused by the pandemic and exit it “ready to soar.”

“The men and women of the greatest country on earth are going to defeat this coronavirus and reclaim our future. And the Senate is going to make sure they have the ammunition they need to do it,” he said. “I am thrilled we’re finally going to deliver for the country that has been waiting for us to step up.”

McConnell, who introduced the legislation on Thursday, concluded his speech from the Senate floor, stating that they will pass the bill later Wednesday before it is sent to the House.

President Donald Trump earlier Tuesday said Mnuchin and others of his administration had been working on the bill that he’d hoped would pass.

During a briefing with the Coronavirus Task Force, Trump said the legislation will protect families, jobs and businesses, stating he was confident the two sides could come to an agreement.

“I’m also confident the Democrats will do the right thing,” he told reporters. “I feel very confident. They’re working very hard together right now — Republicans and Democrats — and they’re getting very close to a very fair deal and a great deal for the people of our country.”

He said the package is the first step to restoring “confidence and stability” to the economy, stating he hoped the country would reopen “very soon.”

The passing of the bill cames as the number of cases of COVID-19 continued to steadily climb within the United States, which at more than 55,000 cases is the world’s third most infected country on the planet after Italy and China, according to a live tally by Johns Hopkins University. 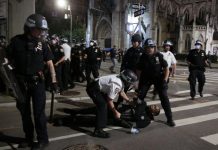