New Mexico’s Cooks Peak Fire has burned more than 21,000 acres near the border of Mora and Colfax counties.

Firefighters have been unable to contain the blaze amid drought conditions and high winds, as well as an abundance of dry brush and grass, which serves as fuel for the rapidly spreading fire.

The blaze broke out on Sunday, and the eastern side of the fire remained the most threatened as of Friday afternoon, moving increasingly closer to the Colfax County line.

The communities of Rayado, Sweetwater and Sunnyside are under mandatory evacuation orders, while people living in Cimarron, Philmont Scout Ranch, and Miami have been told to be ready to leave at a moment’s notice by the Mora and Colfax County Sheriff’s offices.

Several other communities are under “ready” status for evacuation orders.

To the north, fires are burning in Colorado, where evacuation orders have been issued for areas north of Colorado Springs.

By Friday afternoon, the Colorado Springs Fire Department had extinguished the bulk of the Farm Fire without the loss of any structures. However, existing evacuation orders covering an entire residential subdivision, remained in place as of 2 p.m. MDT.

A number of areas across the state are at risk of extreme fire danger Colorado Gov. Jared Polis said Friday during a news conference.

“We know that this issue is about more than one fire,” Polis said, bringing up the link between climate change and the growing severity of wildfires. “It’s really about tackling the increased fire threat.”

To the west, the Tunnel Fire continues burning 14 miles northeast of Flagstaff, Ariz. Flames consumed more than 20,000 acres as of Friday morning, as strong and regularly shifting winds are causing major problems, according to fire officials.

The fire broke out on Sunday night and is only 3% contained.

As of Thursday night, some 109 properties were impacted by the fire, including 30 burned residences and 24 with destroyed outbuildings, the Coconino County Sheriff’s Office reported.

More than 750 homes had been evacuated as of Thursday afternoon.

Arizona Gov. Doug Ducey declared a state of emergency Thursday morning because of the fire, the cause of which remains under investigation.

The Tunnel Fire has also forced many Navajo families to evacuate, with at at least one home destroyed.

About 20 Navajo families had to evacuate. 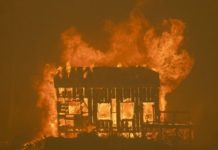 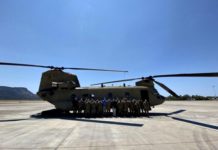