July 5 (UPI) — A woman was arrested Wednesday after she climbed the State of Liberty in protest of the Trump administration’s immigration policies, officials said.

Therese Patricia Okoumou, 44, was part of a previous protest at the base of the Statue of Liberty where several activists from New York City-based Rise and Resist, an anti-Trump group, held up a banner that said, “Abolish ICE,” referring to the Immigration and Customs Enforcement agency. After about seven people were arrested in that demonstration, Okoumou walked to another part of the statue base and refused to move “until all the children are released,” a New York Police Department official told CNN.

“She just kind of mentioned the children in Texas,” NYPD Officer Brian Glacken said in a news conference. 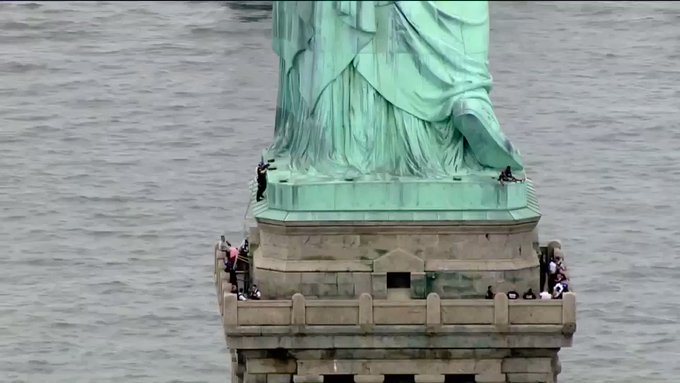 #BREAKING #exclusive video of woman who’s scaled the Statue Of Liberty. ESU officers trying to coax her down. @PIX11News

She faces charges of interfering with national park regulations, trespassing and disorderly conduct, according to WLNY-TV.

After Okoumou’s arrest, Rise and Resist distanced itself from her actions.

“The person who climbed the Statue of Liberty was one of forty participants in our planned banner action, but her decision to climb the statue was made independently of the group, without consulting any other member of the group,” they said in a statement. “We understand and share her desire to see the immediate release of children from detention and reunion with their parents. We hope that her legal representation will arrange for her release under her own recognizance.”

The Trump administration has received criticism in recent weeks for its “no tolerance” policy at the U.S.-Mexico border, which involved prosecuting all immigrants who enter illegally and, in some cases, separating children from their parents as the cases get moved through federal court. In response to that criticism, President Donald Trump signed an executive order on June 20to end the family separating policy, but some families have yet to be reunited.