Oct. 30 (UPI) — A 12-year-old boy attempted to commit suicide by jumping off an overpass Saturday, but landed on a car and instead killed the 23-year-old driver, Virginia State Police said.

The boy, who has not been named because he is a minor, was severely injured in the incident and remains in critical condition.

The deceased victim is Marisa W. Harris, of Olney, Md., who died upon impact. According to WJLA, her friend was in the passenger seat and, when the boy crashed through the windshield, had to gain control of the steering wheel and steered it off the interstate.

The passenger was not injured in the incident.

Harris was a graduate student pursuing a degree in clinical counseling at Marymount University. Family said she was studying counseling to help troubled kids like the 12-year-old boy who jumped off the overpass.

“That’s the irony that we’re at looking at right now,” her father, Patrick Harris, told the Washington Post.

“She was caring — I mean she had an absolute love for children,” Harris’ mother, Leigh Miller said.

Police searching for shooter after woman killed in Taylorsville 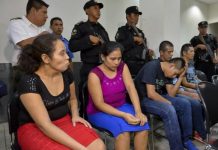 Nicaraguan pastor sentenced for killing woman to ‘purify her soul’