SIKESTON, Mo., Aug. 13 (Danielle Haynes) — A diner filed a lawsuit Monday against a Missouri restaurant famous for its “throwed rolls” after a piece of bread hit her and caused an injury.

Troy Tucker sued Lambert’s Cafe in Sikeston, Mo., after she said she was hit by a roll and “sustained a lacerated cornea with a vitreous detachment and all head, neck, eyes and vision were severely damaged” in September 2014, WDAF-TV, St. Louis, Mo., reported.

She is seeking $25,000 to pay for her medical bills and legal fees. The lawsuit said Lambert’s Cafe should know about the dangers caused by throwing rolls.

Jerry Johnson, the general manager of the restaurant, told KFVS-TV in Cape Girardeau, Mo., the employees never mean to injure anyone when they throw rolls. He said people have tried to sue the restaurant in the past, and in some cases, the company’s insurance has paid the cost of medical bills.

It’s unclear if Tucker has a case for her allegations of “carelessness and negligence” against Lambert’s Cafe. There are multiple signs inside and and outside the restaurant calling it “Home of Throwed Rolls.” 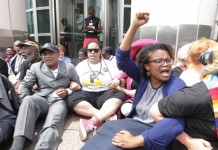