Jan. 14 (UPI) — For the first time in the country’s history, women in Saudi Arabia were allowed inside of a sports stadium to watch a professional soccer game.

The soccer match Friday between local teams Al-Ahli and Al-Batin in the Red Sea port city of Jeddah, was the first game to have women in the crowds.

The move comes as a push intensifies to reform the country, one ranked in 2016 by the World Economic Forum as No. 141 out of 144 on gender equality. Previously, women caught inside a stadium were arrested.

Now, women attending games must remain in designated “family sections,” which are separate from other, all-male portions of the bleachers.

In the past, government regulation, social custom and religion factored into what Saudi Arabia women wore, and also barred them from driving, holding certain jobs and traveling. Some rules have changed under King Salman bin Abdulaziz Al Saud, who became the country’s ruler in 2015.

The king’s son, Mohammed bin Salman, helped drive efforts to change the rules by placing women in prominent positions and in June, allowing them to drive.

Last October, the Saudi government announced the long-standing stadium ban was coming to an end beginning with stadiums in Riyadh, Jeddah and the eastern city of Dammam. 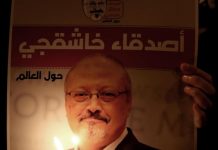