April 4 (UPI) — Ukrainian officials said hundreds of bodies of civilians have been found in liberated cities near the capital Kyiv as international anger mounts against Russia over its alleged war crimes with some world leaders saying they amount to genocide.

Iryna Venediktova, Ukraine’s prosecutor general, said Sunday on Facebook that 410 bodies of Ukrainian civilians have been removed from the Kyiv region since Friday.

The bodies were found in Bucha, Irpin and other towns and villages recently liberated from retreating Kremlin troops, Ukraine’s ministry of defense said.

The announcement was made as Mykhailo Podolyak, an adviser to President Voldymyr Zelensky, posted graphic images on Twitter of bodies strewn about the streets of Bucha. Some of the images show a mass grave of people partially buried in a sand pit, others lying dead by the side of the road with their hands tied behind their backs.

Video posted by the ministry of defense shows bodies of people it says were killed after being lined up against a wall on their knees.

“This is a planned genocide,” he said in a tweet.

“Bodies of men and women, who were killed with hands tied. The worst crimes of Nazism have returned to [Europe],” he said in another, calling on world leaders to impose an energy resource embargo on Russia. “Stop the murders!” 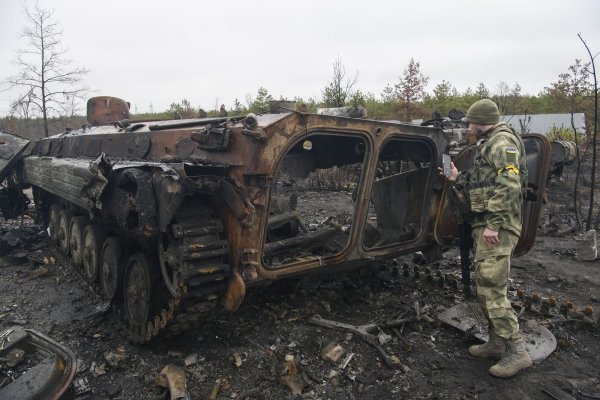 Russia has rebuked the accusations by Podolyak as “fake,” with its ministry of defense posting a statement to Telegram accusing Ukraine of being responsible for the mass grave and for having “deliberately laid out” bodies in the street “to create a more dramatic picture.”

However, world leaders have vowed to aid Ukraine in its push to prosecute and punish Russia and its leadership for war crimes.

“The Russian authorities are responsible for these atrocities, committed while they had effective control of the area,” the EU Council said in a statement on Monday. “They are subject to the international law of occupation.”

“The perpetrators of war crimes and other serious violations, as well as the responsible government officials and military leaders will be held accountable. The European Union supports all measures to ensure accountability for human rights violations and violations of international humanitarian law in Ukraine by Russian armed forces.”

The International Criminal Court has opened an investigation into possible Russian war crimes committed in Ukraine going back to 2013, and the EU said Monday it is in full support and was assisting Venediktova with the collection and preservation of evidence.

Since Russia’s invasion on Feb. 24, democratic nations have hit Moscow with steep sanctions that have taken a bite out of its economy.

With the new revelations of potential war crimes, the EU said it will advance further punitive measures against Russia “as a matter of urgency.”

Mateusz Morawiecki, the prime minister of Poland, said Monday the “genocide” committed by Russia in Bucha “changes everything in the perception of this war,” while calling for even stiffer sanctions to be imposed against Russia.

“The time for calculations is over, the brutality of the totalitarian-fascist regime from Russia touches a growing group of Ukrainian citizens,” he said on Facebook. “Instead of discussing human rights in warm conference rooms, start defending them finally!”

On Sunday after the revelations of the atrocities, Morawiecki demanded a meeting of the European Council to be convened as soon as possible.

He also called for all Russia-owned assets and those of Russian oligarchs in Western banks to be confiscated and for all trade relations with Moscow be immediately severed.

“European money must stop flowing to the Kremlin,” he said in a statement. “Putin’s criminal and increasingly totalitarian regime needs to have one thing imposed on it: SANCTIONS WHICH ACTUALLY WORK.”

He called for more arms to be deployed to Russia, saying it was their “political and moral duty” to do so.

“Enough of the false gestures and avoidance tactics,” he said. “Enough!”

“We will decide on further measures among allies in the next few days,” he said Sunday in a statement. “President [Vladimir] Putin and his supporters will feel the consequences.”