CRAWLEY, Australia, Aug. 22 (UPI) — Scientists have selected the second fastest supercomputer in the world to function as the brain of the world’s largest telescope, the Square Kilometre Array.

Researchers recently installed part of the observatory’s operating software on the famed Chinese supercomputer known as Tianhe-2. The powerful software allows millions of pieces of data retrieved by SKA to be efficiently processed. Processing tasks are divided among the thousands of computers that make up Tianhe-2.

“Whenever a data item is ready, that’s triggering the next task — the task is not running idle, waiting for anything,” Andreas Wicenec, head of data intensive astronomy at the International Centre for Radio Astronomy Research, explained in a news release.

So far, Wicenec and his research partner Tao An, a professor from Shanghai Astronomical Observatory in China, have only installed a portion of the software system.

Currently, the software is capable of simultaneously executing 66,000 tasks or items. Wicenec says next they’ll run a few million items.

Though a single entity, the SKA telescope is actually many telescopes — 250,000 antennas. All that data must be quickly and efficiently processed, which is why Tianhe-2 is such an integral part of the project.

“The most important part is the co-design and co-optimization of SKA data processing software set and supercomputers such as Tianhe-2,” Tianhe-2 director Yutong Lu concluded.

SKA is still under construction in Australia and South Africa. When it’s completed, the collection of radio telescopes will offer the highest resolution astronomical images in history. 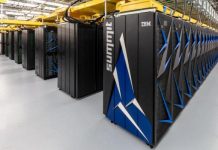