Feb. 20 (UPI) — Spanish artist Pablo Picasso painted over another artist’s painting to create one of his so-called Blue Period masterpieces, scientists who studied the artwork with X-ray technology announced at a conference in Austin, Texas.

A research team from Northwestern University, the Art Institute of Chicago Center for Scientific Studies, the Art Gallery of Ontario and the National Gallery of Art in Washington, D.C., said a landscape lies hidden beneath La Miséreuse Accroupie — called The Crouching Woman in English.

The landscape painting, likely done by a student, lies 90 degrees to the vertical painting Picasso completed in 1902. Researchers already knew about an underlying landscape in another Picasso painting and had observed contrasting, underlying color peaking through cracks in the final painting.

“Picasso incorporated the lines of the cliff edges into the woman’s back, for example,” a news release from the team said.

John Delaney, senior imaging scientist at the National Gallery of Art, also used infrared reflectance hyperspectral imaging on the painting, which found Picasso painted an arm holding a disc, which he later covered with the woman’s cloak.

“It became clear to me that the arm hidden under the visible surface of La Miséreuse accroupie is the same as the proper right arm of a crouching woman in a Picasso watercolor recently sold at auction,” AGO assistant curator of modern art Kenneth Brummel said.

“We now are able to develop a chronology within the painting structure to tell a story about the artist’s developing style and possible influences,” said Sandra Webster-Cook, AGO’s senior conservator of paintings. 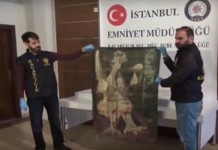