“The Yemeni Foreign Ministry demands that the UAE stop all types of financial and military support to all military formations that don’t operate under the state and the rule of law,” a statement from the Yemeni government said.

“We ask Saudi Arabia and its wise leadership of the coalition to support the legitimate government and stop this unlawful and unjustified military escalation.”

Yemen’s civil war has been going since 2015 and pits the Iran-backed rebel Houthis against the internationally recognized government of President Abdu Rabbo Mansour Hadi, a Saudi ally. A Saudi-led coalition — which included the UAE — supported Hadi’s troops, but earlier this summer the UAE said it planned to reduce its presence in Yemen.

Other Stories of Interest:  80 soldiers killed in airstrike on military base in Yemen

But UAE-backed southern separatists and the Yemeni government — who are nominal allies in their fight against the Houthis — have been fighting for control over the port city of Aden. The Houthis drove Hadi out of the capital of Sanaa to the government-held stronghold of Aden in 2015.

But the separatists, the Southern Transitional Council, are seeking independence for the southern part of the country. The STC took control over the port city earlier this month, but Hadi’s government said it reclaimed its stronghold Wednesday.

The airstrikes this week came after the STC captured the town of Zanjabar. 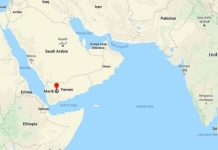 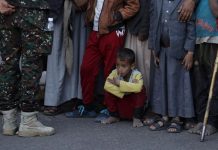