July 6 (UPI) — President Donald Trump is scheduled to host an outdoor rally in New Hampshire this weekend, his re-election campaign has announced.

Trump’s campaign announced the rally via Twitter on Sunday, stating it will be held on Saturday at Portsmouth International Airport starting at 8 p.m., making it one of the president’s first rallies since March when the coronavirus began to spread throughout the country.

“We look forward to so many freedom-loving patriots coming to the rally and celebrating America, the greatest country in the history of the world,” Hogan Gidley, Trump’s 2020 national press secretary, said in a statement.

The rally will be one of Trump’s first official re-election campaign events since early March after the first death to the virus in the country was announced and states placed restrictions on large gatherings to stymie its spread.

His campaign said Sunday that there will be “ample access” to hand sanitizer at the New Hampshire rally and all attendees will be provided a face mask “that they are strongly encouraged to wear.”

The rally’s announcement follows his first rally, held June 20, when Trump spoke before a few thousand people indoors at the Bank of Oklahoma Center in Tulsa.

At least two campaign staffers who attended the event tested positive in the following days.

New Hampshire is one of the few states to be experiencing an overall decline in daily cases.

On Sunday, the state’s Department of Health and Human Services announced a two-day total of 46 new cases of COVID-19, increasing its total to nearly 5,900, which makes it one of the least infected states in the country.

New Hampshire Democratic Party Chair Ray Buckley accused Trump in a statement Sunday of “flying in” to the state to hold a rally that will “further highlight the chaos he has caused.”

“Trump’s response to the COVID-19 crisis has been chaotic and woefully inadequate, resulting in thousands of Granite Staters contracting the virus and hundreds of lives lost, while causing significant damage to our state’s economy,” he said.

Since the first patient in the United States was diagnosed with COVID-19 in mid-January, nearly 3.9 million people in the country have been infected, resulting in more than 129,000 deaths, according to a live tracker of the disease by Johns Hopkins University. 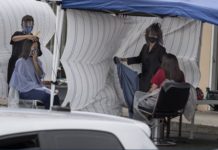