The visit comes three weeks after two Coptic churches were struck by bombs on Palm Sunday. At least 45 people were killed.

After being greeted by Egyptian Prime Minister Sherif Ismail at Cairo’s airport, the pope met with Shiehk Amhed el-Tayeb, the grand imam of the Sunni Muslim seat of high learning at al-Azhar, at a peace conference, where both religious leaders spoke.

The pope also met with Egyptian President Abdel Fattah al-Sisi, exchanging gifts in a private meeting and later speaking in a public forum.

The trip centers on a meeting between Pope Francis and Pope Tawadros II, leader of Egypt’s Coptic Orthodox Church. They are scheduled to meet at a Muslim-Orthodox Christian conference, and continue the talk at the Coptic leader’s residence.

Francis and Tawadros II are expected to pray at the church of St. Peter and St. Paul, which is attached St. Mark’s Coptic Orthodox Cathedral in Cairo’s Abbassiya district and was bombed in December. 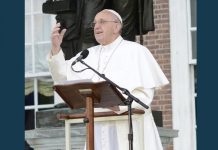 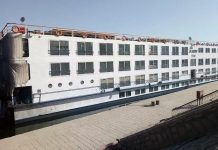 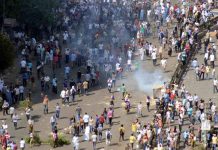