HARPURSVILLE, N.Y.,  April 15, 2017 (Gephardt Daily) — One of the Internet’s most- watched celebrities has given birth.

The calf emerged, followed by a steady stream of fluids Saturday morning as some 1.2 million viewers witnessed on YouTube. The calf did not immediately stand. Instead, April appeared to lick her calf and the calf slowly lifted long neck. The park announced on Saturday afternoon that the calf is a male. 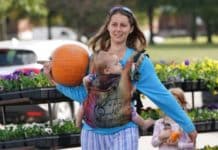