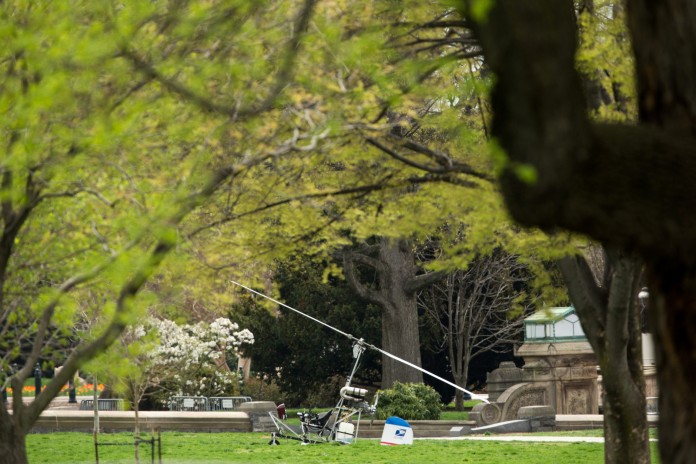 WASHINGTON, May 20 (UPI) — A small aircraft pilot who allegedly violated restricted airspace in Washington, D.C., last month when he landed on Capitol Hill was indicted by a federal grand jury Wednesday — and could face a lengthy prison term.
[one_fourth]

[/one_fourth][three_fourth_last]
Douglas Hughes, 61, was arrested last month after allegedly landing a gyrocopter near the U.S. Capitol building. He was charged with multiple offenses, including two felony counts of flying without proper certification and violating aircraft registration requirements.

Wednesday, a grand jury indicted Hugheson those counts plus misdemeanor charges of violating national defense airspace and operating a vehicle falsely labeled as a postal carrier.

A Florida postal worker, Hughes flew from Gettysburg, Pa., to the District on April 15, authorities say, and landed his gyrocopteron the Capitol’s west lawn. He has said his intent was to protest big money spending in politics. The pilot has also stated that his intent was to deliver 535 letters, one for each voting member of Congress, on the day he landed at the Capitol.

The case has brought attention to national security vulnerabilities because Hughes was allegedly able to fly into closely guarded airspace without much trouble. Prosecutors said he was able to pass through three no-fly zones, even though he had given plenty of notice that he was on his way, NBC News reported.

Hughes’s next court appearance is scheduled for Thursday. He has been allowed to remain outside of jail but is prohibited from traveling to Washington and operating any type of aircraft pending the outcome of the charges.

“Congress is in it for the money,” Hughes said regarding his political intent, in an interview with USA Today. “They are in it for themselves. They are doing what special interests tell them to do, and we have been cut out of the political process.”

Hughes reportedly spent two years planning the demonstration, even buying a gyrocopter and learning how to fly it for the occasion. A Secret Service agent even questioned him in 2013, at which time Hughes reportedly told the agent of his plans to perform some type of non-violent protest with the aircraft.

Since his arrest, he has become somewhat of a celebrity and champion of citizens who feel too much money is at play in contemporary U.S. politics.

He might pay a heavy price, though, as he could lose his postal job as a result and may never be allowed to fly again.

“Was it worth it? Absolutely. I don’t know how many hundreds of thousands of Americans have given their lives for the cause of freedom,” he said in the USA Today report. “Right now, there is a huge threat from within — that our government is shifting to becoming a plutocracy.”